Reshoot R for AGA Amiga Try Out Preview is Extravaganza

Richard Löwenstein is creating Reshoot R for AGA Amiga. A fantasic extravaganza upgrade from his first Reshoot game that many commented to be way too hard. Amitopia mentioned it back in April 2017. Well, now it is 2018 and the very same person is gearing up the beat regarding Reshoot R. Amitopia mentioned Reshoot R at Amiga32, where we revealed the game for the first time.

I was lucky at Amiga32 where I tried the game at Amiga32 and talked with Richard while playing. I loved Reshoot R instantly! Especially the animations of the enemies was one of my biggest WOW’s. The Super Stardust alike graphics and the pumping music in the background also created correct atmosphere when playing. Gameplay was also fluid! But because of all the noise at Amiga32, I felt that I needed to try it out at Distrita office where we have our trusty Amiga 1200 with 68060 50MHz CPU. Here is my true experience… 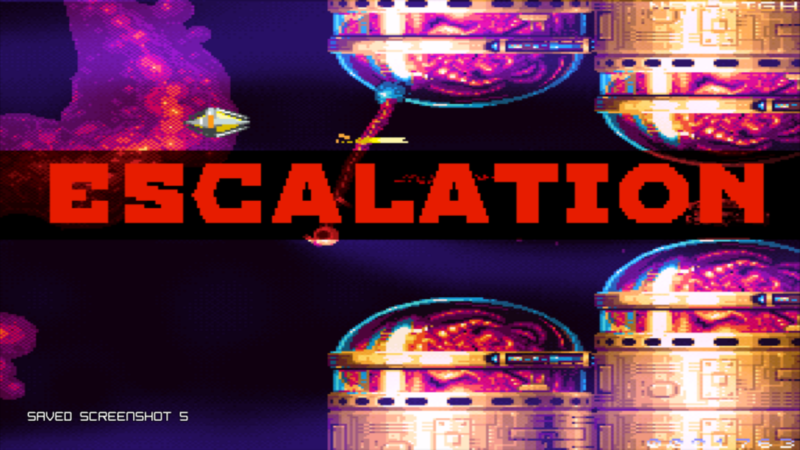 What if the Japanese started to create shooters for the Amiga back in the days? I don’t really want to speculate on that. But the Amiga game developers back in late 80s and in the 90s knew how to create awesome European shooters. The Amiga didn’t have many American or Japanese developers at all. Shooters like Menace, Denaris (Katakis), Super Stardust, R-Type, Agony, Silkworm, Dragon Breed, Project X, T-ZerO and Disposable Hero are much slower than Japanese shooters but at the same time harder to complete. The obstacles seems to be harder in European shooters than in the xtravaganza cool Japanese shooters on Dreamcast and MAME/NEO-GEO. The music also seems to be in slower mode,… However in Reshoot R this not the case!

Reshoot R action is fast! The game now have several weapon upgrades, speed upgrades and other upgrades that the player can pick up during gameplay. Gameplay is fluid on Amiga CD32 as well on Amiga 1200 with 68060. The game got some minor glitches in the demo that we got to test. Richard also told me that this level wont look like this when the full release it out.

Note! This is a playable demo that is fitted onto a Christmas special CD32 CD that was put together by Erik Hogan. If you transfer the game from MAC or PC to your Amiga and can’t run the demo. Then you need to use CLI and use the protect command.

Use “Protect reshootr_a32 +e” and the game should run fine. Thanks to the nice people at Commodore Amiga Facebook group that helped me with my issue getting the demo up and running. On our test machine which is a Amiga 1200 68060 50MHz 32MB RAM 4GB CF HD Indivision AGA mk2 DVI out and PCMCIA Ethernet card, I had no issues once the game loaded up gameplay wise. There are some glitches though that I didn’t notice at all at Amiga32 which you can watch on the video below. It happens at the part with the huge snake alike creature. On the showcase machine at Amiga32 this didn’t happen. See the video below!…

RESHOOT R  Features when the Final Game will be out

Its great to see a shooter for Amiga coming soon. The Amiga commercial gaming market is still active. With Richard’s Reshoot R, Pixelglass games like Worthy and AlarCity coming. The Amiga gaming is still getting quality gaming content. In 2017 we saw birth to The Dream of Rowan, Time Gal, Giana Sisters S.E. and even Another World sequel was ported to the Amiga back in 2016 which you can read about on Distrita website. You find it available on Aminet.

Support Amiga Developers! They do an incredible job keeping the Amiga spirit alive