BOXX is out for Amiga Now

Boxx Trilogy.. Where have you been

Today I am trying something new. While thinking of a game to review that hasn’t been done 100 time before and searching endlessly though archives, I had a thought; “why not review a new game”. Away I scurried deep into the internet like a mouse in a wheel of cheese. “Games made for the Amiga 2017?” This is what I asked the great giver of information (google) and to me the oracle spoke “BOXX!”. More specifically Boxx3, which came out earlier this year and oh what a treat it is! 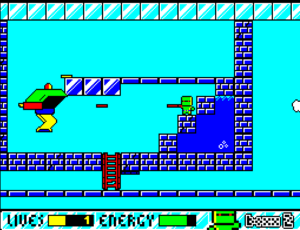 You heard correct! Across most old platforms, from the Z80 through to the 16 bit generation  and doubtless beyond, hardcore fans still create content for their favourite systems. You would be shocked! are you shocked? of course you might already know this, so instead of dusting off relics today we shall look at Boxx1,2 and 3 By Lemming880. The first game Boxx released 2014 and created in Backbone for the Amiga 1200. Boxx2, the sequel came out in 2015 and Boxx3 in 2017. All are available form Aminet and ill leave a link here for you to run and get them, Also a CD32 compilation is available for you there too, containing all 3 games on 1 CD.

WHAT IS THAT?… what do we do? who am I? and whats that in my pocket?

The Boxx series is a generic platformer style trio of game on the surface with a simple mission statement “Collect all the coins”. We’ve heard this story before, right? Well that’s the games in a nut shell but play them and it’s just like the first time you played Mario or any number of classics (I can only think of Mario right now). You get a feeling of joy and exhilaration. While collecting coins is you mission the finesse in witch you leap gaps and crush enemy’s is what gives you the tingly feeling of playing a good game well. 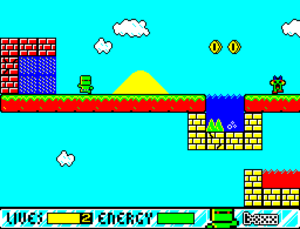 Well just look at them screenshots. What do they say? They say: simple, clean, sharp. They do also say Nintendo and this is not a bad thing, after all this is not a graphical style that was picked up by Amiga graphics creators of the time. And why not? I love the graphics style in this game. Sure its more reminiscent of the 8 bit systems but the C64 could not pull off those colours, and the ZX Spectrum would be clashing all over the place. Sega however now the master system could but I digress. I think there wonderful and you all make your own minds up!

CONTROLS AND PLAYABILITY… Bang on the money

Controls are simple on the A1200  you can use keyboard,  joystick or CD32 pad. The CD32 pad seems like a good option as i don’t like the joystick controls of up being jump never have done so that’s nice, I have used all 3 methods and there all great. Controlling you little green guy is a joy with him having just the right amount of momentum, friction and speed to make it challenging but fun. Rarely when you die in this game does it feel like the game cheated you in fact you usually blame yourself which is a great sign in a platformer. Although pretty much all the games are the same each one eases you into game play so well, with a gentle difficulty curve and not throwing too much at you at one. I like this as I’ve never been a “good” gamer and find my ability to get past level 3 of just about any game lacking to say the least. 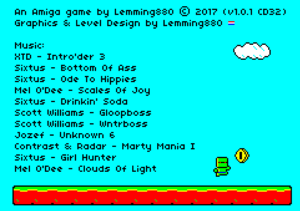 and listen to a sample of the wonderful music in these 3 games, and I’ll leave the credits for the music here also. Beyond that all I can say is that I love it. Chiptune is not for everyone, but it is for me. It fits this game great and to the people who make Chiptune, I salute you.

So we Can safely say you love it then?

Yes you can say that! Three excellent little games made by one guy for the love of doing it, released to us the public for free! ITS FREE! Okay so there are three games and besides more levels. 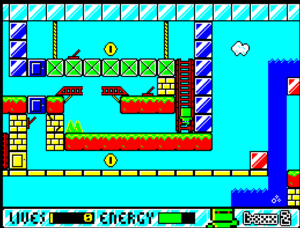 Different enemies and cooler puzzles don’t change much across the 3 games however when the games are this good then why change them. Lemming880 has paid attention over the years (I can tell). He looked at what makes a game great and then made a game better than great. Too often in the Amiga golden years were games too hard, the controls too terrible or the visuals too dirty. Why wasn’t there ever an answer to the Mario games on the Amiga besides the Great Giana Sisters (C64 and later ported to the Amiga),  but with the gift of being able to look back on mistakes and know what nostalgia kicks a lot of people crave, this game was able to deliver on multiple fronts. I urge you to play it, I know after writing this I’m going to go play them start to finish as so far I have only reached level 2 on each game. It’s not the games fault; I have a cold and am dosed up with flu medicine. Hopefully it hasn’t clouded my judgement too much.

Now I’m at an impasse. I’ve only been reviewing games for 4 weeks now, so have I peaked to early? I’m going to look back on some advice I received from NBA all-star Magic Johnson who once said to me “kid one day you will write reviews for an obsolete computer on the internet and when you do that don’t give a 10/10”. Believe me (which you can do, everything I say is true, honest) I would like to give this game full marks, but i haven’t finished one of the three yet. Pending level 3 being and complete crap-fest of annoyance, the controls switching direction and the sound of dying cats being played, I cant see it happening. This game is fantastic.